What Can John Calvin Teach Us on His Birthday?

July 10, 2019, marks the 510th birthday of John Calvin.  But the streamers and balloons are nowhere to be found.  Simply put, we live in a day that is so wrapped up in technology and new inventions that we tend to forget the lessons of the past, especially the lessons of a dead guy.

[share-quote author=”Dr. David Steele” via=“DavidQaoud”]Calvin’s life was a pilgrimage that was characterized by God’s providential grace.[/share-quote]

First, Calvin was a humble man.  C.J. Mahaney lays bare the heart of a humble man: “Humility is honestly assessing ourselves in light of God’s holiness and our sinfulness.”  And the Scriptures demand this kind of humility.  “Finally, all of you, have unity of mind, sympathy, brotherly love, a tender heart, and a humble mind” (1 Pet. 3:8, ESV).

Calvin was humble before his God.  He understood that he was a recipient of God’s grace (Rom. 3:24) and that he had been saved by grace alone, through faith alone, in Christ alone (Eph. 2:8-9).  Consequently, he understood that his only boast was in the cross-work of Christ (1 Cor. 2:2; Gal. 6:14).  Calvin understood the absolute contrast between the sinfulness of man and the majesty of God, what many have referred to as the Creator-creature distinction.  He writes, “Men are never duly touched and impressed with a conviction of their insignificance until they have contrasted themselves with the majesty of God.”

Calvin was humble before people.  He understood that humility is the foundation of Christian character.  The libertines of the 16th century were naming their dogs after Calvin – but Calvin remained humble despite the hatred hoisted upon him.  Calvin opines, “I have always been exceedingly delighted with the words of Chrysostom, ‘The foundation of our philosophy is humility’ and still more with those of Augustine.  If asked, ‘What are the precepts of Christianity?’ I will answer, ‘First, humility, second and third humility.”

As beneficiaries of the Protestant Reformation, this is a truth we too often take for granted.  Even worse, some professing Evangelicals have begun to subtly fall under the spell of the Roman Catholic Church and either forget free grace or ignore it all together.  Perhaps it is time for a new Reformation; a radical rekindling of the precious truths that drove Calvin, Luther, Zwingli, and Knox to their knees in contrition as they celebrated the free grace that was theirs in Christ alone!

Third, Calvin trembled at God’s Word.  He revered the truth of God’s Word.  Steve Lawson adds, “Calvin stood firmly on the chief cornerstone of the Reformation – sola Scriptura, or ‘Scripture alone.’  He believed Scripture was the verbum Dei – the Word of God – and it alone should regulate church life, not popes, councils, or traditions.  Sola Scriptura identified the Bible as the sole authority of God in His church, and Calvin wholeheartedly embraced it, insisting that the Bible was the authoritative, inspired, inerrant, and infallible Word of God.”

Calvin responded to the truth of God’s Word.  He was a sinful man who had a heart that desperately sought to respond obediently to the Word of God.  To that end, he preached the Word of God faithfully with all the passion he could muster!

Calvin understood that people are transformed by truth

We live in an age where technique is king and pragmatism is queen.  The church has fallen prey to this vicious cycle.  We tend to do what works and invest in what brings results.  Steve Lawson writes, “The church is always looking for better methods in order to reach the world.  But God is looking for better men who will devote themselves to his biblically mandated method for advancing his kingdom, namely, preaching – and not just any kind of preaching, but expository preaching.”  In a day when preaching is being downplayed and theology is being ignored, we need to remember what Calvin understood, namely, people are transformed by truth.

Calvin lived in a time when Protestants were being burned at the stake because they were being transformed by the truth.  He was committed to boldly proclaiming the truth no matter what the cost.    Calvin adds, “If, while conscious of our innocence, we are deprived of our substance by the wickedness of man, we are, no doubt, humanly speaking, reduced to poverty; but in truth our riches in heaven are increased: if driven from our homes, we have a more welcome reception into the family of God; if vexed and despised, we are more firmly rooted in Christ; if stigmatized by disgrace and ignominy, we have a higher place in the kingdom of God; and if we are slain, entrance is thereby given us to eternal life.  The Lord having set such a price upon us, let us be ashamed to estimate ourselves at less than the shadowy and evanescent allurements of the present life.”

The flaws in Calvin himself remind us of the sinfulness of sin.  He was deeply aware of his own sin.  But he was also acutely aware of the reality of grace.  His life bears witness to this: He wassimul iustus et peccator – simultaneously righteous and sinful..

The cry of Calvin’s heart was the Lord Jesus Christ.  He constantly pointed sinners to Christ and his cross.

May the life of John Calvin serve as an inspiration to live the Christian life with vibrancy to the glory of God.  May his courage embolden each of us in the difficult days ahead.  When the days grow dark, persecutions escalate, and our freedoms begin to erode, may we remember the motto still etched in Genevan stone, “post tenebras lux,” after darkness light.  May his humility, contrition, and trembling before the Word of God mark our lives as well.  And may the contemporary pulpit be a reflection of Calvin’s pulpit; may men of God stand behind the sacred desk and faithfully deliver to unchanging truths of Scripture so that saints might be strengthened, edified, convicted, encouraged, and equipped!

Calvin agrees, “Let them edify the body of Christ.  Let them devastate Satan’s reign.  Let them pasture the sheep, kill the wolves, instruct and exhort the rebellious.  Let them bind and loose, thunder and lightning, if necessary, but let them do all according to the Word of God.” 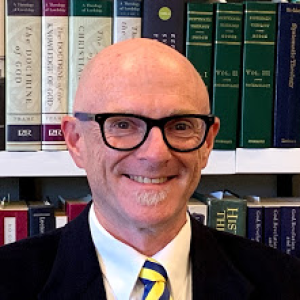 David S. Steele (D. Min, Bakke Graduate University) serves as the senior pastor of Christ Fellowship in Everson, Washington. He is the author of Bold Reformer: Celebrating the Gospel-Centered Convictions of Martin Luther, A Godward Gaze: The Holy Pursuit of John Calvin, and The White Flag: When Compromise Cripples the Church.